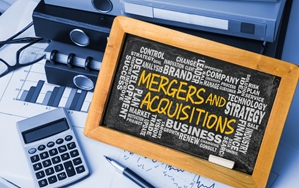 Every year serves as a fresh start for growth and opportunity, especially when you're a business owner. In 2019, there was plenty of the latter – in Australia, in particular, as well as throughout the world – as tens of thousands of companies decided to join forces and form new organisations.

According to the Institute of Mergers and Alliances, approximately 47,000 mergers and acquisitions (M&As) occurred globally last year. Speaking more broadly, since 2000, there have been over 790,000, with a combined total value of more than $57 trillion.

When two or more companies combine to pool together resources, virtually anything is possible, as a number of acquisitions have gone on to prove by redefining entire industries and giving newly formed organisations a leg up on their competition.

All that being said, acquisitions don't always pan out as they're initially intended – sometimes to the point of falling apart completely. Deals that turned sour were particularly frequent in 2016, when approximately 7% of M&As never saw the light of day, according to the Cass Business School at the University of London.

Failed M&As can lead to massive frustration among leadership and staff, engender bad publicity and severely complicate work processes, sometimes even to such a degree that the fiasco ultimately adversely affects profitability. Perhaps the biggest frustration of all is that such M&As gone wrong often went through preventable problems, because they typically present red flags in the early transaction stages (that are, at times, unfortunately ignored).

If 2020 presents a set of circumstances that enables you to grow by acquiring another business, here are a few warning signs to be cognisant of. These may be smoke signals suggesting that a seemingly good deal is all wrong or is simply too good to be true:

Non-forthcoming about financials
Profit and loss statements (P&Ls) may be the most important aspect of any business acquisition, as they provide a peek into how the business manages money, its cash flow and which aspects of the company are most valuable. They can also help determine whether certain products or services are worth maintaining or doing away with, depending on how they're resonating with customers.

But if P&Ls aren't readily available or owners are preventing you from seeing all of their books, it may be the first sign that something is amiss and there is something about the business that they aren't telling you. Transparency is crucial to any transaction, which is why performing due diligence is a must.

Staff members who interview poorly
Businesses joining forces also entails a unification of employees, many of whom will work under the same roof or be in frequent communication via email, video conferencing or instant messages. Holding interviews with project managers or senior-level staff can provide insight on their background and what they have to offer. But if several interviewees fail to perform, it could be an indication that their temperament or working knowledge won't serve the company well.

Telltale signs of potential people troubles include the inability to answer questions that they ought to know, a history of unfavourable run-ins with human resources or a lack of specific work examples that provide evidence of their knowledge or leadership qualities.

Filed for bankruptcy in the past
There are a litany of reasons why a business may wind up filing for bankruptcy. Naturally, the main reason as to why is financial, but how recent that filing was can provide context into whether the issue(s) forcing the bankruptcy were ever ironed out. They may have been as simple as poor decision-making from former leadership who have since left the company or were let go for lack of performance. The company may have also been a victim of circumstances due to poor market conditions like the Great Recession – which, in the grand scheme of things, isn't all that far in the past. Past bankruptcy isn't necessarily a deal-breaker, but at the very least, it warrants a deeper dive to learn about the situation that led to the filing in the first place.

Clashing business models
Every business' main goal is prosperity but the means to a profitability aren't always the same, as organisations often work from a set of principles laid out in their charter or mission statement. For example, if your company is trying to reduce its carbon footprint through actionable steps throughout the supply chain (e.g. reducing single-use plastic bags, composting, using recyclable material for packaging, etc.) but the company you're acquiring has a business model that fly in the face of those actionable steps, something has to give.

Here as well, performing your due diligence is the best way to determine if your business models are harmonious or clash.

Acquiring another company can be the single-best decision you'll ever make – it can also be the worst. Assuring it's the former requires asking the right questions. WMC Accounting does that through due diligence services, a review of your goals and objectives and assistance with purchase negotiations. For more information about our other specialist services or to request an appointment, please contact us today.

How can your business hold onto millennial workers?

7 questions to ask when buying a business in Australia